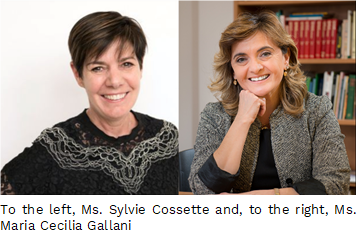 The Quebec Network on Nursing Intervention Research (RRISIQ) would like to inform you that Maria Cecilia Gallani, a full professor at the Faculty of Nursing of Université Laval, is the new Editor-in-Chief of the journal Science of Nursing and Health Practices / Science infirmière et pratiques en santé. She succeeds Sylvie Cossette, a retired professor at the Faculty of Nursing of the Université de Montréal, whose vision has made a distinctive contribution to the journal's growth. Under Ms. Cossette's leadership, who has held this position since June 2020, the achievements have been significant and are summarized hereafter.

Over the past two years, Science of Nursing and Health Practices / Science infirmière et pratiques en santé has published two regular issues and two thematic issues: a special issue about COVID-19 in June 2021 and a special issue for the SIDIIEF congress in October 2022, allowing the journal to be closer than ever to the issues that affect population health. The types of articles published in the journal have been diversified. For example, the emergence of COVID-19 research has led to the introduction of a section for study protocols to inform about ongoing research, foster collaborations, and avoid duplication. Later, a new accepted article format, letters to the editor, was introduced to encourage scientific discussions about recently published articles.

Another priority was to speed up the time between article submission and the public dissemination of research, for which the journal adopted the "post-publication" dissemination model. This dissemination model involves publishing articles following peer review and as soon as the editorial team accepts them. In the context of the open science movement to which RRISIQ adheres, the journal adopted in April 2021 the Open Journal System (OJS) - an open-source software designed in Canada for the management of scholarly journals - with a dissemination model on the pan-Canadian platform Érudit. The editorial team has also worked on content indexing to speed up the retrieval and citation of open access articles (free to the readership). Following best practices in scientific publishing, the content of the journal's OJS website has been enriched, among other things, with a detailed description of the peer review process and the posting of statistics regarding this process.

The adoption of a logo for the journal, which represents health practices and interdisciplinarity, reinforces its visual identity. Another achievement is the increased recognition of reviewers' work by sending them editorial decisions on reviewed articles. In addition, starting in 2023 and for the year 2022, an annual certification attesting to the reviewers' work will now be sent to them.

We would like to thank Ms. Sylvie Cossette and Ms. Mélina Bernier (editorial and production coordinator since 2018) for their exemplary work over the past few years. We also welcome Ms. Gallani for her commitment to this new mandate and all the best in her new duties. However, this is not Ms. Gallani's first experience with the journal. She was actively involved in its creation in 2018.